PublicatiesCIE-PublicatiesCIE 206:2014 - The Effect of Spectral Power Distribution on Lighting for Urban and Pedestrian Areas 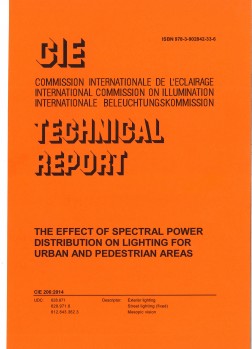 PublicatiesCIE-PublicatiesCIE 206:2014 - The Effect of Spectral Power Distribution on Lighting for Urban and Pedestrian Areas

CIE 206:2014 - The Effect of Spectral Power Distribution on Lighting for Urban and Pedestrian Areas

Lighting design for roads in urban and pedestrian areas considers primarily the needs of pedestrians rather than drivers. This report presents a summary of recent research on the implications of lamp spectrum for those tasks considered to be important for pedestrians. These tasks include detection of pavement obstacles, inter-personal judgements such as facial recognition, and judgement of brightness. For pedestrians, brightness is important because brighter lighting tends to produce higher levels of perceived safety in a particular location.
It has been found that in the mesopic region lamps with a higher scotopic/photopic (S/P) ratio appear brighter, and permit better detection of peripheral obstacles, than do lamps with lower S/P-ratios at the same illuminance. This means that lamps with a high S/P-ratio can be used either at the same illuminance to create a higher brightness and better detection of peripheral obstacles or at a lower illuminance but the same brightness and obstacle detection ability, the latter leading to a reduction in energy consumption. The CIE recommended system of mesopic photometry can be used to predict brightness and peripheral obstacle detection under lamps having different spectra.
Further visual needs include facial recognition and that the appearance of the environment is acceptable. How light spectrum affects the ability to recognize the identity of other people is still uncertain, but there is a suggestion that chromatic information can be of benefit. As for the acceptability of the appearance of the environment, this is more consistently related to the colour rendering of the light source. For these visual needs colour rendering is important in addition to the S/P-ratio, but there are insufficient data with which to fully characterize the effects.
Given these findings it is possible to modify the illuminances used in residential roads when using different light sources. These illuminances should be chosen based on two characteristics of the light source, S/P-ratio and colour rendering index (CRI). The report includes new guidance in the United Kingdom (UK) in which a reduction in the illuminance from the levels recommended in the S-series of lighting classes can be considered when using lamps which have a CIE general colour rendering index greater than or equal to 60; the reduction is calculated using the CIE recommended system of mesopic photometry. The UK guidance assumes that low pressure sodium lighting is the reference for the S-series of lighting classes. Other countries that choose to follow the system adopted in the UK can modify the approach to take account of different benchmark lighting. For example, if the high pressure sodium lamp (which is in widespread use in Europe) is used as the benchmark, the allowed reduction in illuminance will be less than that allowed in the UK.
Other factors, in addition to the influence of lamp spectrum on vision, may also need to be considered when selecting the most appropriate lighting. These are discussed in the final section of the report, and include effects of lighting on the natural environment, glare, and the impact of changes in the eye that occur with age. The increase in visual effectiveness offered by lamps optimized for use in the mesopic region (i.e. higher S/P ratio) may be lower for older persons than for the rest of the population, and such lamps may lead to increased discomfort glare effects for these older observers. In general, the use of ‘white’ light in street lighting applications is beneficial, provided that these other factors are also taken into account and are not significantly impacted (e.g. provided glare is not significantly increased).
The publication is written in English, with a short summary in French and German. It consists of 38 pages with 4 figures and 8 tables and is readily available at the National Committees of the CIE or via the CIE Webshop.